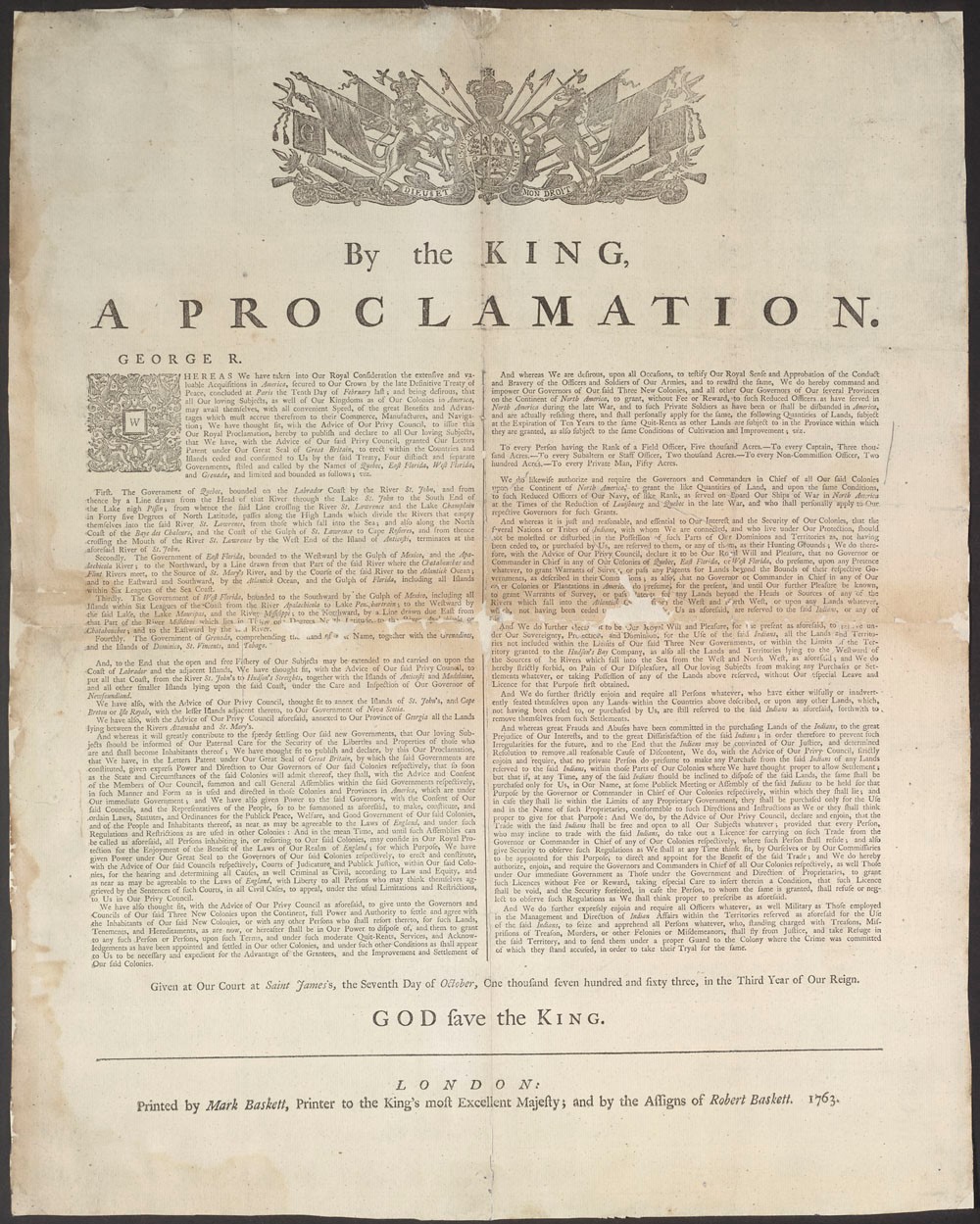 And whereas great Frauds and Abuses have been committed in purchasing Lands of the Indians, to the great Prejudice of our Interests. and to the great Dissatisfaction of the said Indians: In order, therefore, to prevent such Irregularities for the future, and to the end that the Indians may be convinced of our Justice and determined Resolution to remove all reasonable Cause of Discontent, We do, with the Advice of our Privy Council strictly enjoin and require, that no private Person do presume to make any purchase from the said Indians of any Lands reserved to the said Indians, within those parts of our Colonies where We have thought proper to allow Settlement: but that, if at any Time any of the Said Indians should be inclined to dispose of the said Lands, the same shall be Purchased only for Us, in our Name, at some public Meeting or Assembly of the said Indians, to be held for that Purpose by the Governor or Commander in Chief of our Colony respectively within which they shall lie: and in case they shall lie within the limits of any Proprietary Government, they shall be purchased only for the Use and in the name of such Proprietaries, conformable to such Directions and Instructions as We or they shall think proper to give for that Purpose: And we do, by the Advice of our Privy Council, declare and enjoin, that the Trade with the said Indians shall be free and open to all our Subjects whatever, provided that every Person who may incline to Trade with the said Indians do take out a Licence for carrying on such Trade from the Governor or Commander in Chief of any of our Colonies respectively where such Person shall reside, and also give Security to observe such Regulations as We shall at any Time think fit, by ourselves or by our Commissaries to be appointed for this Purpose, to direct and appoint for the Benefit of the said Trade:

And we do hereby authorize, enjoin, and require the Governors and Commanders in Chief of all our Colonies respectively, as well those under Our immediate Government as those under the Government and Direction of Proprietaries, to grant such Licences without Fee or Reward, taking especial Care to insert therein a Condition, that such Licence shall be void, and the Security forfeited in case the Person to whom the same is granted shall refuse or neglect to observe such Regulations as We shall think proper to prescribe as aforesaid.

And we do further expressly conjoin and require all Officers whatever, as well Military as those Employed in the Management and Direction of Indian Affairs, within the Territories reserved as aforesaid for the use of the said Indians, to seize and apprehend all Persons whatever, who standing charged with Treason, Misprisions of Treason, Murders, or other Felonies or Misdemeanors, shall fly from Justice and take Refuge in the said Territory, and to send them under a proper guard to the Colony where the Crime was committed, of which they stand accused, in order to take their Trial for the same.