The traditional definition of diversity is broad, encompassing not only race, ethnicity, and gender but also religious beliefs, national origin, and cognitive and physical abilities as well as sexual preference or orientation. This section examines two of these categories, religion and ability, looking at how an ethical manager handles them as part of an overall diversity policy. In both cases, the concept of reasonable accommodation means an employer must try to allow for differences among the workforce.

Protections for People with Disabilities

In the United States, the Americans with Disabilities Act (ADA), passed in 1990, stipulates that a person has a disability if he or she has a physical or mental impairment that reduces participation in “a major life activity,” such as work. An employer may not discriminate in offering employment to an individual who is diagnosed as having such a disability. Furthermore, if employment is offered, the employer is obliged to make reasonable accommodations to enable him or her to carry out normal job tasks. Making reasonable accommodations may include altering the physical workplace so it is readily accessible, restructuring a job, providing or modifying equipment or devices, or offering part-time or modified work schedules. Other accommodations could include providing readers, interpreters, or other necessary forms of assistance such as an assistive animal ((Figure)). The ADA also prohibits discriminating against individuals with disabilities in providing access to government services, public accommodations, transportation, telecommunications, and other essential services.

A person with a service dog can usually perform all the essential function of the job, with some assistance. (credit: “DSC_004” by Aberdeen Proving Ground/Flickr, CC BY 2.0) 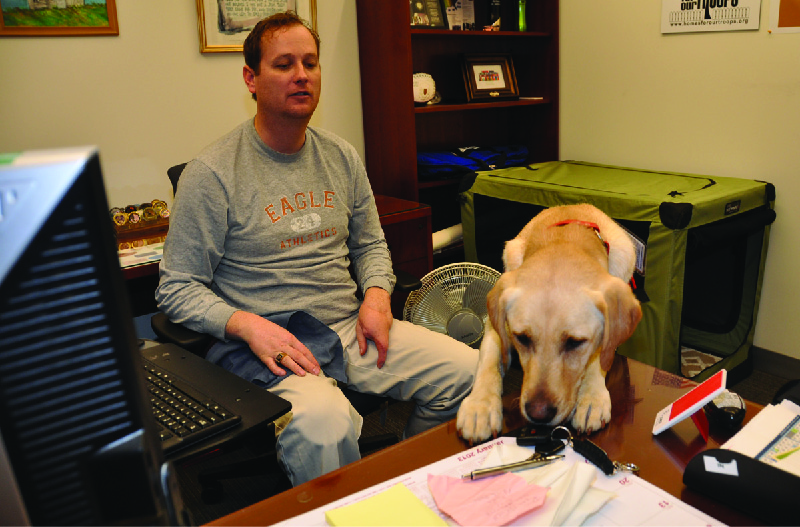 Access and accommodation for employees with physical or mental disabilities are good for business because they expand the potential pool of good workers. It is also ethical to have compassion for those who want to work and be contributing members of society. This principle holds for customers as well as employees. Recognizing the need for protection in this area, the federal government has enacted several laws to provide it. The Disability Rights Division of the U.S. Department of Justice lists ten different federal laws protecting people with disabilities, including not only the ADA but also laws such as the Rehabilitation Act, the Air Carrier Access Act, and the Architectural Barriers Act.

The EEOC is the primary federal agency responsible for enforcing the ADA (as well as Title VII of the Civil Rights Act of 1964, mentioned earlier in the chapter). It hears complaints, tries to settle cases through administrative action, and, if cases cannot be settled, works with the Department of Justice to file lawsuits against violators. Visit the EEOC website to learn more.

A key part of complying with the law is understanding and applying the concept of reasonableness: “An employer is required to provide a reasonable accommodation to a qualified applicant or employee with a disability unless the employer can show that the accommodation would be an undue hardship—that is, that it would require significant difficulty or expense.”

The law does not require an employee to refer to the ADA or to “disability” or “reasonable accommodation” when requesting some type of assistance. Managers need to be able to recognize the variety of ways in which a request for an accommodation is communicated. For example, an employee might not specifically say, “I need a reasonable accommodation for my disability” but rather, “I’m having a hard time getting to work on time because of the medical treatments I’m undergoing.” This example demonstrates a challenge employers may face under the ADA in properly identifying requests for accommodation.

Managers are usually sticklers about attendance, but Verizon recently learned an expensive lesson about its mandatory attendance policies from a 2011 class action lawsuit by employees and the EEOC. The suit asserted that Verizon denied reasonable accommodations to several hundred employees, disciplining or firing them for missing too many days of work and refusing to make exceptions for those whose absences were caused by their disabilities. According to the EEOC, Verizon violated the ADA because its no-fault attendance policy was an inflexible and “unreasonable” one-size-fits-all rule.

The EEOC required Verizon to pay $20 million to settle the suit, the largest single disability discrimination settlement in the agency’s history. The settlement also forced Verizon to change its attendance policy to include reasonable accommodations for persons with disabilities. A third requirement was that Verizon provide regular training on ADA requirements to all mangers responsible for administering attendance policies.

Managing Religious Diversity in the Workplace

Title VII of the CRA, which governs nondiscrimination, applies the same rules to the religious beliefs (or nonbeliefs) of employees and job applicants as it does to race, gender, and other categories. The essence of the law mandates four tenets that all employers should follow: nondiscrimination, nonharassment, nonretaliation, and reasonable accommodation.

This calendar shows the significant number of holidays and observances an employer must consider with regard to time-off policies, including holidays of the three major religions, secular days, and other traditional days off. It may be a challenge to give everyone all preferred days off. (credit: modification of “2019 Calendar” by “Firkin”/openclipart, Public Domain) 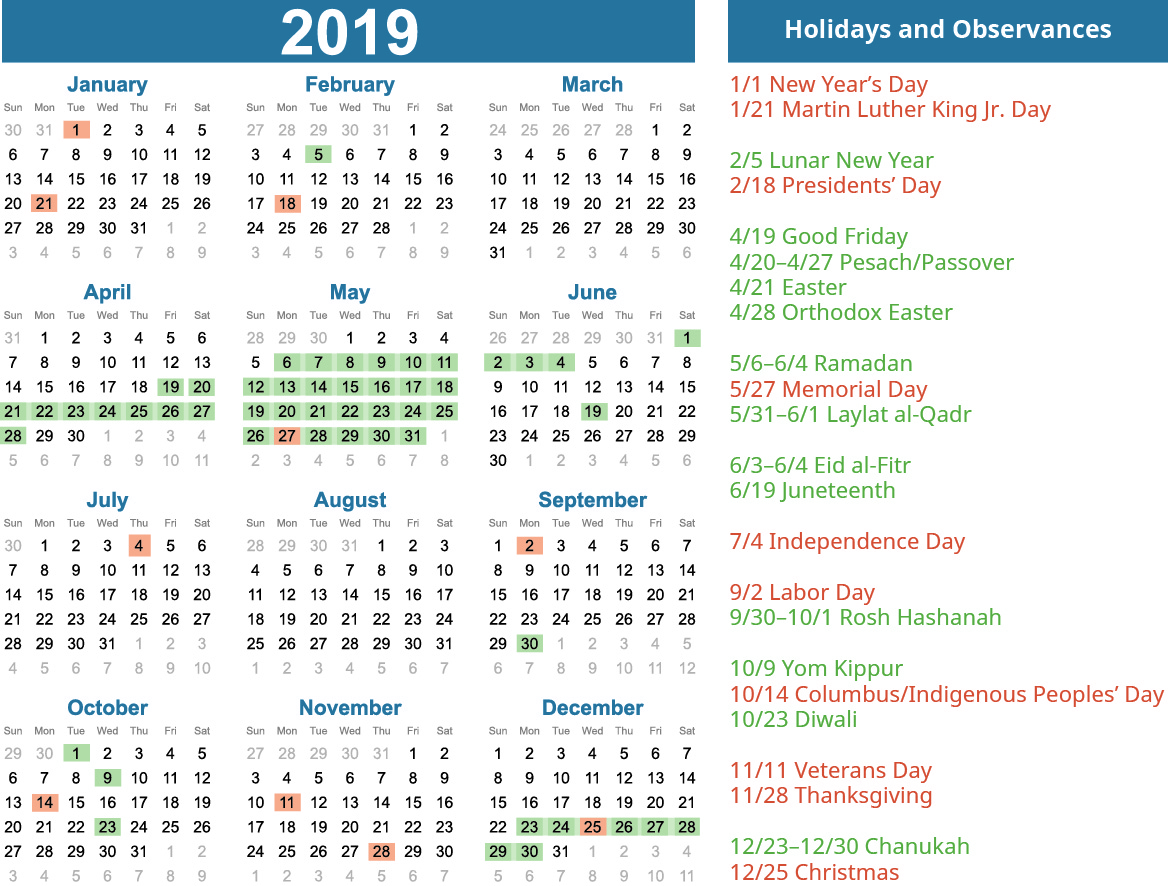 Some cases of accommodation are based on cultural heritage rather than religion.

Can Everyone’s Wishes Be Accommodated?

You are a manager in a large Texas-based oil and gas company planning an annual summer company picnic and barbecue on the weekend of June 19. The oil industry has a long tradition of outdoor barbecues, and this one is a big morale-building event. However, June 19 is “Juneteenth,” the day on which news of the Emancipation Proclamation reached slaves in Texas in 1865. Several African American employees always attend the barbecue event and are looking forward to it, but they also want to celebrate Emancipation Day, rich in history and culture and accompanied by its own official event. The picnic date cannot be easily rescheduled because of all the catering arrangements that had to be made.

Reasonable accommodation may require more than just a couple of hours off to go to weekly worship or to celebrate a holiday. It may extend to dress and uniform requirements, grooming rules, work rules and responsibilities, religious expression and displays, prayer or meditation rooms, and dietary issues.

The Sikh faith dates to roughly the fourteenth century in India. Its practitioners have made their way to many Western nations, including the United Kingdom, Canada, Italy, and the United States. Sikhs in the West have experienced discrimination due to the distinctive turbans adult males wear, which are sometimes mistaken for Islamic apparel. Men are also required to wear a dagger called a kirpan. California law permits religious observers to wear a sheathed dagger openly, but not hidden away. Watch this video showing a San Joaquin County Sheriff’s sergeant explaining the accommodation given to Sikhs to wear a kirpan in public to learn more. How comfortable are you with permitting daggers to be carried openly in the workplace?

The law also protects those who do not have traditional beliefs. In Welsh v. United States (1970), the Supreme Court ruled that any belief occupying “a place parallel to that filled by the God of those admittedly qualifying for the exception” is covered by the law.

A nontheistic value system consisting of personal, moral, or ethical beliefs that is sincerely held with the strength of traditional religious views is deserving of protection. Protected individuals need not have a religion; indeed, if atheist or agnostic, they may have no religion at all.

Religion has become a hot-button issue for some political groups in the United States. Religious tolerance is the official national policy enshrined in the Constitution, but it has come under attack by some who want to label the United States an exclusively Christian nation.

The U.S. Supreme Court, in a 2015 case involving Abercrombie & Fitch, ruled that that “an employer may not refuse to hire an applicant for work if the employer was motivated by avoiding the need to accommodate a religious practice,” and that doing so violates the prohibition against religious discrimination contained in the CRA of 1964, Title VII. According to the EEOC general counsel David Lopez, “This case is about defending the American principles of religious freedom and tolerance. This decision is a victory for our increasingly diverse society.”

The case arose when, as part of her Muslim faith, a teenage girl named Samantha Elauf wore a hijab (headscarf) to a job interview with Abercrombie & Fitch. Elauf was denied a job because she did not conform to the company’s “Look Policy,” which Abercrombie claimed banned head coverings. Elauf filed a complaint with the EEOC alleging religious discrimination, and the EEOC, in turn, filed suit against Abercrombie & Fitch, alleging it refused to hire Elauf because of her religious beliefs and failed to accommodate her by making an exception to its “Look Policy.”

“I was a teenager who loved fashion and was eager to work for Abercrombie & Fitch,” said Elauf. “Observance of my faith should not have prevented me from getting a job. I am glad that I stood up for my rights, and happy that the EEOC was there for me and took my complaint to the courts. I am grateful to the Supreme Court for the decision and hope that other people realize that this type of discrimination is wrong and the EEOC is there to help.”

To accommodate religious beliefs, the absence of formal religious faith, or disabilities, businesses should make every reasonable accommodation they can to allow workers to contribute to the company. This may require scheduling flexibility, the use of special devices, or simply an understanding manager.

The primary law prohibiting religious discrimination in the private sector workplace is ________.

If an ADA accommodation is significantly expensive, ________.

True or false? There are no similarities between legal protections in the workplace for religion and disability.

False. In both cases, employers must be willing to make a reasonable accommodation for the employee.

The primary law prohibiting discrimination against disabled workers is the ADA. What is its main requirement?

The ADA’s main requirement is that employers make reasonable accommodations for applicants and workers with disabilities to allow them to perform the essential functions of the job.

Religious apparel and/or appearance are protected under Title VII’s umbrella of religious nondiscrimination. Give an example.

One example of religious apparel that is protected under Title VII is Muslim women’s head scarves, which, in most situations, they may wear.