This section introduces the concept of sustainability, which refers to the sociopolitical, scientific, and cultural challenges of living within the means of the earth without significantly impairing its function.

Taking The Long View: Sustainability in Evolutionary and Ecological Perspective

Of the different forms of life that have inhabited the Earth in its three to four billion year history, 99.9% are now extinct. Against this backdrop, the human enterprise with its roughly 200,000-year history barely merits attention. As the American novelist Mark Twain once remarked, if our planet’s history were to be compared to the Eiffel Tower, human history would be a mere smear on the very tip of the tower. But while modern humans (Homo sapiens) might be insignificant in geologic time, we are by no means insignificant in terms of our recent planetary impact. A 1986 study estimated that 40% of the product of terrestrial plant photosynthesis — the basis of the food chain for most animal and bird life — was being appropriated by humans for their use. More recent studies estimate that 25% of photosynthesis on continental shelves (coastal areas) is ultimately being used to satisfy human demand. Human appropriation of such natural resources is having a profound impact upon the wide diversity of other species that also depend on them.

Evolution normally results in the generation of new lifeforms at a rate that outstrips the extinction of other species;  this results in strong biological diversity. However, scientists have evidence that, for the first observable time in evolutionary history, another species — Homo sapiens — has upset this balance to the degree that the rate of species extinction is now estimated at 10,000 times the rate of species renewal. Human beings, just one species among millions, are crowding out the other species we share the planet with. Evidence of human interference with the natural world is visible in practically every ecosystem from the presence of pollutants in the stratosphere to the artificially changed courses of the majority of river systems on the planet. It is argued that ever since we abandoned nomadic, gatherer-hunter ways of life for settled societies some 12,000 years ago, humans have continually manipulated their natural world to meet their needs. While this observation is a correct one, the rate, scale, and the nature of human-induced global change — particularly in the post-industrial period — is unprecedented in the history of life on Earth.

There are three primary reasons for this:

Firstly, mechanization of both industry and agriculture in the last century resulted in vastly improved labor productivity which enabled the creation of goods and services. Since then, scientific advance and technological innovation — powered by ever-increasing inputs of fossil fuels and their derivatives — have revolutionized every industry and created many new ones. The subsequent development of western consumer culture, and the satisfaction of the accompanying disposable mentality, has generated material flows of an unprecedented scale. The Wuppertal Institute estimates that humans are now responsible for moving greater amounts of matter across the planet than all natural occurrences (earthquakes, storms, etc.) put together.

Secondly, the sheer size of the human population is unprecedented. Every passing year adds another 90 million people to the planet. Even though the environmental impact varies significantly between countries (and within them), the exponential growth in human numbers, coupled with rising material expectations in a world of limited resources, has catapulted the issue of distribution to prominence. Global inequalities in resource consumption and purchasing power mark the clearest dividing line between the haves and the have-nots. It has become apparent that present patterns of production and consumption are unsustainable for a global population that is projected to reach between 12 billion by the year 2050. If ecological crises and rising social conflict are to countered, the present rates of over-consumption by a rich minority, and under-consumption by a large majority, will have to be brought into balance.

Thirdly, it is not only the rate and the scale of change but the nature of that change that is unprecedented. Human inventiveness has introduced chemicals and materials into the environment which either do not occur naturally at all, or do not occur in the ratios in which we have introduced them. These persistent chemical pollutants are believed to be causing alterations in the environment, the effects of which are only slowly manifesting themselves, and the full scale of which is beyond calculation. CFCs and PCBs are but two examples of the approximately 100,000 chemicals currently in global circulation. (Between 500 and 1,000 new chemicals are being added to this list annually.) The majority of these chemicals have not been tested for their toxicity on humans and other life forms, let alone tested for their effects in combination with other chemicals. These issues are now the subject of special UN and other intergovernmental working groups.

The Evolution of Sustainability Itself

The concept of sustainability, however, can be traced back much farther to the oral histories of indigenous cultures. For example, the principle of inter-generational equity is captured in the Inuit saying, ‘we do not inherit the Earth from our parents, we borrow it from our children’. The Native American ‘Law of the Seventh Generation’ is another illustration. According to this, before any major action was to be undertaken its potential consequences on the seventh generation had to be considered. For a species that at present is only 6,000 generations old and whose current political decision-makers operate on time scales of months or few years at most, the thought that other human cultures have based their decision-making systems on time scales of many decades seems wise but unfortunately inconceivable in the current political climate.

While much progress is being made to improve resource efficiency, far less progress has been made to improve resource distribution. Currently, just one-fifth of the global population is consuming three-quarters of the earth’s resources (Figure 1). If the remaining four-fifths were to exercise their right to grow to the level of the rich minority it would result in ecological devastation. So far, global income inequalities and lack of purchasing power have prevented poorer countries from reaching the standard of living (and also resource consumption/waste emission) of the industrialized countries. 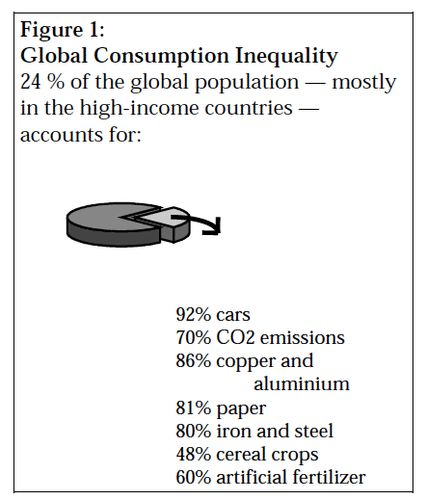 Countries such as China, Brazil, India, and Malaysia are, however, catching up fast. In such a situation, global consumption of resources and energy needs to be drastically reduced to a point where it can be repeated by future generations. But who will do the reducing? Poorer nations want to produce and consume more. Yet so do richer countries: their economies demand ever greater consumption-based expansion. Such stalemates have prevented any meaningful progress towards equitable and sustainable resource distribution at the international level. These issue of fairness and distributional justice remain unresolved.

The ecological footprint (EF), developed by Canadian ecologist and planner William Rees, is basically an accounting tool that uses land as the unit of measurement to assess per capita consumption, production, and discharge needs. It starts from the assumption that every category of energy and material consumption and waste discharge requires the productive or absorptive capacity of a finite area of land or water. If we (add up) all the land requirements for all categories of consumption and waste discharge by a defined population, the total area represents the Ecological Footprint of that population on Earth whether or not this area coincides with the population’s home region.

Land is used as the unit of measurement for the simple reason that, according to Rees, “Land area not only captures planet Earth’s finiteness, it can also be seen as a proxy for numerous essential life support functions from gas exchange to nutrient recycling … land supports photosynthesis, the energy conduit for the web of life. Photosynthesis sustains all important food chains and maintains the structural integrity of ecosystems.”

What does the ecological footprint tell us? Ecological footprint analysis can tell us in a vivid, ready-to-grasp manner how much of the Earth’s environmental functions are needed to support human activities. It also makes visible the extent to which consumer lifestyles and behaviors are ecologically sustainable calculated that the ecological footprint of the average American is – conservatively – 5.1 hectares per capita of productive land. With roughly 7.4 billion hectares of the planet’s total surface area of 51 billion hectares available for human consumption, if the current global population were to adopt American consumer lifestyles we would need two additional planets to produce the resources, absorb the wastes, and provide general life-support functions.

Some Indicators of Global Environmental Stress

Forests — Deforestation remains a main issue. 1 million hectares of forest were lost every year in the decade 1980-1990. The largest losses of forest area are taking place in the tropical moist deciduous forests, the zone best suited to human settlement and agriculture. Recent estimates suggest that nearly two-thirds of tropical deforestation is due to farmers clearing land for agriculture. There is increasing concern about the decline in forest quality associated with intensive use of forests and unregulated access.

Soil — As much as 10% of the earth’s vegetated surface is now at least moderately degraded. Trends in soil quality and management of irrigated land raise serious questions about longer-term sustainability. It is estimated that about 20% of the world’s 250 million hectares of irrigated land are already degraded to the point where crop production is seriously reduced.

Marine fisheries — 25% of the world’s marine fisheries are being fished at their maximum level of productivity and 35% are overfished (yields are declining). In order to maintain current per capita consumption of fish, global fish harvests must be increased; much of the increase might come through aquaculture which is a known source of water pollution, wetland loss and mangrove swamp destruction.

Biodiversity — Biodiversity is increasingly coming under threat from development, which destroys or degrades natural habitats, and from pollution from a variety of sources. The first comprehensive global assessment of biodiversity put the total number of species at close to 14 million and found that between 1% and 11% of the world’s species may be threatened by extinction every decade. Coastal ecosystems, which host a very large proportion of marine species, are at great risk with perhaps one-third of the world’s coasts at high potential risk of degradation and another 17% at moderate risk.

Atmosphere — The Intergovernmental Panel on Climate Change has established that human activities are having a discernible influence on global climate. CO2 emissions in most industrialized countries have risen during the past few years and countries generally failed to stabilize their greenhouse gas emissions at 1990 levels by 2000 as required by the Climate Change convention.

Toxic chemicals — About 100,000 chemicals are now in commercial use and their potential impacts on human health and ecological function represent largely unknown risks. Persistent organic pollutants are now so widely distributed by air and ocean currents that they are found in the tissues of people and wildlife everywhere; they are of particular concern because of their high levels of toxicity and persistence in the environment.

Hazardous wastes — Pollution from heavy metals, especially from their use in industry and mining, is also creating serious health consequences in many parts of the world. Incidents and accidents involving uncontrolled radioactive sources continue to increase, and particular risks are posed by the legacy of contaminated areas left from military activities involving nuclear materials.

Waste — Domestic and industrial waste production continues to increase in both absolute and per capita terms, worldwide. In the developed world, per capita waste generation has increased threefold over the past 20 years; in developing countries, it is highly likely that waste generation will double during the next decade. The level of awareness regarding the health and environmental impacts of inadequate waste disposal remains rather poor; poor sanitation and waste management infrastructure is still one of the principal causes of death and disability for the urban poor.

Essentials of Environmental Science by Kamala Doršner is licensed under CC BY 4.0. Modified from the original by Matthew R. Fisher.

Environmental Biology by Matthew R. Fisher is licensed under a Creative Commons Attribution 4.0 International License, except where otherwise noted.