H2O is not water. For that matter, neither is “water”. These coupled, seemingly nonsensical statements that I had written on the board before class perplexed a large majority of my biochemistry students. Discussion among students of the meaning of the statements introduced them to the unfamiliar pedagogy of Problem-Based Learning. They were about to encounter this new way of learning after years of experience with traditional, information-dense, stand-and-deliver science courses to which they had become 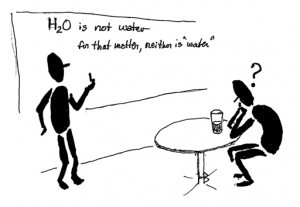 comfortable. While the symbolic chemical formula, H2O, conveys information of importance to a chemist, there is much more to the substance we call water, and personal experience influences individual perceptions. As Korzybski emphasized, “the word is not the thing.” Consider the differing perceptions of “water” by a biochemist, an environmental engineer, a meteorologist, a sailor, a farmer, a limnologist, a sanitation worker, an architect, a swimmer, a parent, a politician, an Inuit, or a Bedouin? A more nuanced understanding of “water” develops with experience, discussion, and exposure to different perspectives. Likewise, learning biochemistry or any other subject involves learning and communicating in the language of the discipline. We construct meaning, and that influences how we think, work, and behave.

Our individual perceptions of “education” vary even more widely than our perceptions of “water”, which, at least, is a recognizable substance. What constitutes “good” or “bad” education depends on the goals, methods, and experiences of the perceiver. Half a century ago, in the midst of the social unrest accompanying the Vietnam War, Neil Postman and Charles Weingartner’s perception of education resulted in their scathing criticism of education as practiced in the United States at the time, as outlined in their book Teaching as a Subversive Activity. They advocated student-centred pedagogy in which learning emerged from students engaging problems relevant to them and society. Students would learn how to learn through the process of asking questions and pursuing relevant knowledge, independent of particular disciplines or assertions by authority figures. This would prepare them for decision making in a rapidly changing world in which the future could not be anticipated.

Education exposes students to new objects, processes, concepts, and ideas that all have words associated with them and, in turn, expand the realm of thought. Knowing goes beyond simple definitions. To think and participate in any discipline requires knowledge and use of its language. Providing definitions to memorize, like “a colorless, transparent, odorless liquid that is the basis for the fluids of living organisms,” is insufficient.  Students must use words in context and internalize the nuanced meanings associated with them in order to communicate effectively with others who also have similar (but not necessarily identical) understanding. “Student-centred education” means different things to different people, but it shifts the focus from “teacher-centred education” to learning rather than telling.

Knowledgeable, independent thinkers threaten the status quo. They challenge the politics of their parents, question the beliefs of their religious leaders, evaluate the qualifications of candidates, expose unfair practices, disregard most advertising, and are willing and open to consider alternatives. Little wonder that those in positions of power are suspicious of and wish to silence minds that question. According to Postman & Weingartner (1969), the purpose of education should be to create an environment that cultivates independent thinkers. Such goals were radical 50 years ago and are still radical in many quarters today. However, numerous teachers now practice constructivist, student-centred pedagogy that aligns with much of the “subversive” agenda.

One of many quotable quotes in Teaching as a Subversive Activity is “…once you have learned how to ask questions—relevant and appropriate and substantial questions—you have learned how to learn and no one can keep you from learning whatever you want or need to know.” Regardless of the discipline, the curriculum should have this single goal. As expressed by Postman & Weingartner (1969), every course should expect students to liberate their curiosity, ask substantive questions, and develop refined “crap detectors.”

Imagine a course in which the instructor places a glass of water in front of the students and asks them to generate 100 questions, evaluate the substance and quality of those questions, and use them to guide a semester of study? I think that Del Harnish would be excited about such a course.

Student-Centered Learning: Subversive Teachers and Standardized Worlds by McMaster University is licensed under a Creative Commons Attribution-NonCommercial-ShareAlike 4.0 International License, except where otherwise noted.