The Olympic Games are a highly prestigious athletic showcase that draws the largest audiences worldwide. During the Olympics, media sources target the highly sought-after athletic dreams of the nation and capitalize on the emotional response evoked by commercial broadcasts and campaigns to gain mass viewership. We, like many other sports fanatics, have always tuned in to watch both the Summer and Winter Games. Yet, how many of us can say we’ve tuned in to watch the Paralympics to the same extent? The Paralympics receive less than 10% of the coverage and audience attendance of the Olympics (Wolbring, 2020). There have been many attempts to increase Paralympic viewership through various media campaigns in hopes of drawing higher attention, and in recent years attendance has been at record highs.

Think you know everything about sports? Think again.

Attempts to increase audience attendance were evident in the Canadian media campaign for the London 2012 Summer Paralympic Games. The main message of the campaign was:

They are the fighters. The odds-defiers. The never-say-nevers. Through an unshakable determination, fierce passion and sheer willpower, they have accomplished what many athletes dream of doing, but few actually can: to go beyond the norm and achieve what many thought impossible  (Dottori, 2018).

After reading that excerpt how do you feel? Did you feel uncomfortable? People with disabilities and activists for the disability community questioned the portrayal of para-athletes and addressed the stereotypical misrepresentation and implications of such a campaign. It is language like this used in media campaigns that continues to perpetuate the idea that persons with disabilities are “different” (Silva & Howe, 2012). As a society we all crave similarity and “normality”, however, campaigns surrounding disability tap into the viewer’s emotions by creating a dichotomy of repulsion and fascination. This is a process called “Othering,” and it creates a divide in society; it oppresses persons with disabilities. Inappropriate language can also be detrimental to disability communities, for instance, narratives about people with a disability as “supercrips” or superhuman (Liebowitz, 2015).

The supercrip narrative “involves presenting the person with disabilities as heroic by virtue of his or her ability to perform feats normally considered not possible for people with disabilities or by virtue of the person living a ‘regular’ life in spite of a disability” (Silva & Howe, 2012).  The marketing technique for the Games depicted Paralympians as having superhuman capabilities and focused on how individuals “overcame” the unlikely odds to be successful “despite” their disability (Orr, 2016; Silva & Howe, 2012). The Paralympics was initially created to allow an equal playing field on which persons with disabilities could compete. However, it has turned into “displaying the plot of someone who has to fight against his/her impairment” (Silva & Howe, 2012). Furthermore, negative social perceptions of persons with disabilities create prejudice in that they are perceived as incapable, and thus supercrip narratives are used as a tool to glorify the athletes.

The ableist world we live in: discrimination as a form of entertainment

The superhuman narrative is a tactic heavily used in the media to draw a higher audience by tapping into the sympathetic emotions of able-bodied individuals. This narrative puts the disability first, rather than the individual, and produces prejudice and stereotypes that can diminish the social and physical development of persons with disabilities (Silva & Howe, 2012). The problem with this form of sport advertising is that its selling pitch is to comfort and draw on the emotions of able-bodied individuals. The expectations that able-bodied people have of persons with a disability are low; similarly the baseline reference that able-bodied people use to assess the worthiness of Paralympic sporting events is commonly very low as well (Silva & Howe, 2012). The supercrip narrative is heavily represented in the sporting world and is considered a direct reflection of these low expectations of people with a disability. Furthermore, the supercrip narrative goes beyond the sporting world and represents an example of the pervasive, unreflective beliefs and distortions surrounding disability in societal structures (Silva & Howe, 2012). 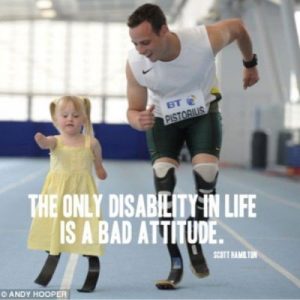 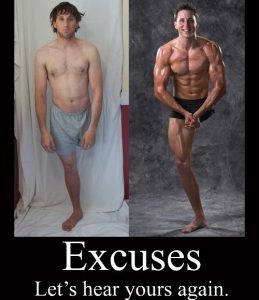 Think about how you have seen disabilities portrayed.  Most likely you may have seen posters like “the only disability in life is a bad attitude” or “your excuse is invalid [over a picture of an athlete or child with a disability]”. With these messages gaining traction online, the general public begins to believe that athletes with disabilities are these superhuman, amazing, and exceptional beings. You can see how this might be problematic. The repercussions of these images circling the internet along with the lack of equal representation of persons with disabilities in the media, are that the public begins to believe that all individuals with a disability are these odd-defying superhumans.

As we discussed earlier, ads or campaigns that use supercrip narratives limit the achievement of those who believe they can never be superhuman. Furthermore, mass media and public awareness campaigns about persons with disabilities have been proven ineffective at changing attitudes towards persons with a disability, as the message is often counterproductive and is not internalized by the viewer/listener (McColl,2018).

Inspiring? Or just living with a disability?

We don’t mean to imply by the title of this section that persons with disabilities are not inspirational, but it is important to understand that if they have not actually done anything inspiring, then they should not be viewed as an inspiration to the able-bodied community. For example, your neighbourhood kid with cerebral palsy who walks to school using their walker is not an inspiration, that is just the way they get from point A to point B. However, if they spend their time after school at the local hospital showing tips and tricks of how they do daily activities to other young kids recently diagnosed with the same condition and give speeches in front of the school to raise awareness about cerebral palsy, then they could be considered an inspiration.

Stella Young, a comedian, journalists, and disability rights activist, discusses this issue with persons with disabilities being viewed as an inspiration and how the language we use towards them, even if it is meant as a compliment, can have varying repercussions. For example, it can perpetuate the idea that persons with disabilities are so strong and brave for simply living the only life they know how to live (Young, 2014).

What can YOU do?

Our hopes for this piece is to address the need to critically evaluate implications associated with supercrip/superhuman imagery in disability sport media coverage. Furthermore, we hope to emphasize the importance of reflecting on the possible negative outcomes this type of representation has in broader social contexts. The Paralympics represent a platform that can significantly influence society’s understanding of disability. However, the positive relationship between sport and disability can only be represented if practices embody the “empowerment” promise of the Paralympic Movement (Silva and Howe, 2012). There is a necessary call to action to shift the negative attitudes and beliefs present in representations of disability in sports media. Sports for persons with disabilities can provide influential grounds as a political stage for social change.

It is imperative that society make changes to the narratives used in relation to disability to prevent them from further perpetuating incorrect information. First, the non-disabled public can stand up for and with the disability community by protesting and complaining about any mass media campaigns that use these demoralizing narratives. Many of these campaigns are written by people without a disability and thus they may not understand that what they are doing is discouraging to persons with disabilities. Second, the public can help to promote the many programs that have been proven to be effective at changing the attitudes towards persons with disabilities. For example, ensuring the non-disabled public, especially children, have contact with persons with disabilities in order to see them as competent individuals who experience coping challenges and implement adaptive strategies to function in a healthy way (Gainforth et al., 2013; Kittson et al., 2013). It is especially important to do this with children because their brains are still malleable. Thus, it becomes easier to prevent negative stereotypes from forming than attempting to change already existing negative stereotypes typically seen in teenagers and adults (Armstrong et al., 2016).

If the representation were to change regarding persons with disabilities, the attitudes surrounding disability would be more positive and inclusive. This shift away from the current overall negative attitude towards persons with disabilities would result in more opportunities due to greater understanding from employers, health care professionals, family members, and friends, etc. (Reeve, 2014). The most important aspect to take away from this reading is to do your research! Persons with disabilities are not incapable, and they are not fragile or scary; together we can remove the stigmatizations and misrepresentations associated with this community. The media has failed to adequately represent the disability community, and thus it is up to us to increase awareness to this issue.

The Ball is in Y(Our) Court: Social Change Through and Beyond Sport by The students of KNPE 473 at Queen's University, Fall 2020, edited by Mary Louise Adams is licensed under a Creative Commons Attribution-NonCommercial 4.0 International License, except where otherwise noted.