By the end of the chapter, you should be able to: 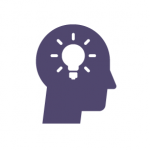 Show What You Know

Motivation refers to an internally generated drive to achieve a goal or follow a particular course of action. Highly motivated employees focus their efforts on achieving specific goals. It’s the manager’s job, therefore, to motivate employees—to get them to try to do the best job they can. Motivated employees call in sick less frequently, are more productive, and are less likely to convey bad attitudes to customers and coworkers. They also tend to stay in their jobs longer, reducing turnover and the cost of hiring and training employees. But what motivates employees to do well? How does a manager encourage employees to show up for work each day and do a good job? Paying them helps, but many other factors influence a person’s desire (or lack of it) to excel in the workplace. What are these factors, are they the same for everybody, and do they change over time? To address these questions, we’ll examine four of the most influential theories of motivation: hierarchy-of-needs theory, two-factor theory, expectancy theory, and equity theory. 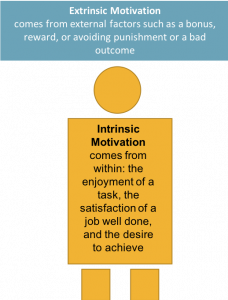 Psychologist Abraham Maslow’s hierarchy of needs theory proposed that we are motivated by the five initially unmet needs, arranged in the hierarchical order shown below, which also lists specific examples of each type of need in both the personal and work spheres of life. Look, for instance, at the list of personal needs in the middle column. At the bottom are physiological needs (such life-sustaining needs as food and shelter). Working up the hierarchy we experience safety needs (financial stability, freedom from physical harm), social needs (the need to belong and have friends), esteem needs (the need for self-respect and status), and self-actualization needs (the need to reach one’s full potential or achieve some creative success). There are two key things to remember about Maslow’s model: 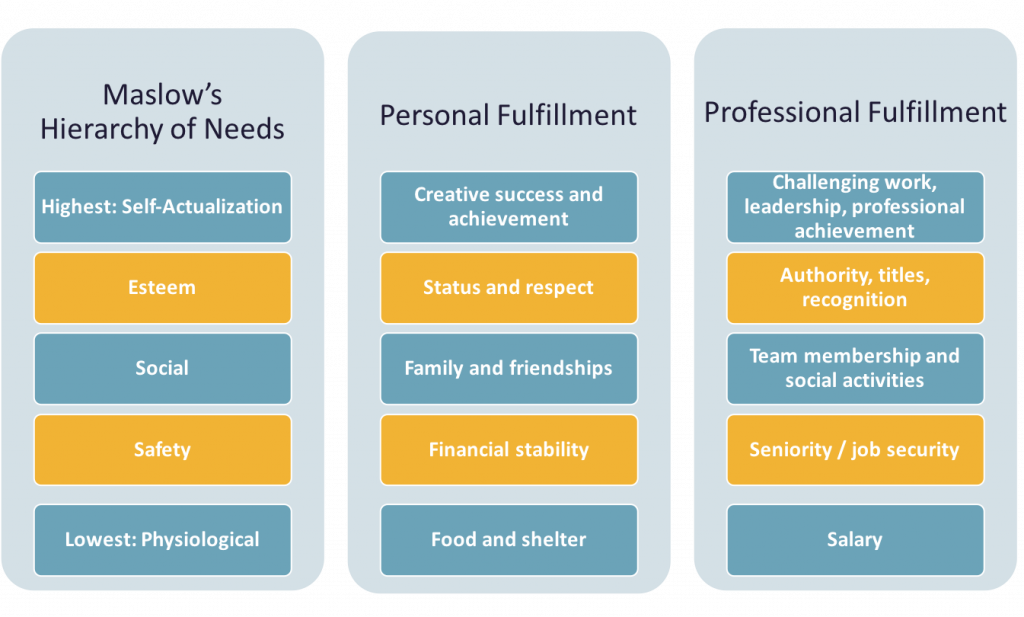 Let’s say, for example, that for a variety of reasons that aren’t your fault, you’re broke, hungry, and homeless. Because you’ll probably take almost any job that will pay for food and housing (physiological needs), you go to work repossessing cars. Fortunately, your student loan finally comes through, and with enough money to feed yourself, you can go back to school and look for a job that’s not so risky (a safety need). You find a job as a night janitor in the library, and though you feel secure, you start to feel cut off from your friends, who are active during daylight hours. You want to work among people, not books (a social need). So now you join several of your friends selling pizza in the student centre. This job improves your social life, but even though you’re very good at making pizzas, it’s not terribly satisfying. You’d like something that your friends will respect enough to stop teasing you about the pizza job (an esteem need). So you study hard and land a job as an intern in the governor’s office. On graduation, you move up through a series of government appointments and eventually run for state senator. As you’re sworn into office, you realize that you’ve reached your full potential (a self-actualization need) and you comment to yourself, “It doesn’t get any better than this.”

Needs Theory and the Workplace

What implications does Maslow’s theory have for business managers? There are two key points: (1) Not all employees are driven by the same needs, and (2) the needs that motivate individuals can change over time. Managers should consider which needs different employees are trying to satisfy and should structure rewards and other forms of recognition accordingly. For example, when you got your first job repossessing cars, you were motivated by the need for money to buy food. If you’d been given a choice between a raise or a plaque recognizing your accomplishments, you’d undoubtedly have opted for the money. As a city councillor, by contrast, you may prefer public recognition of work well done (say, election to higher office) to a pay raise.

Another psychologist, Frederick Herzberg, set out to determine which work factors (such as wages, job security, or advancement) made people feel good about their jobs and which factors made them feel bad about their jobs. He surveyed workers, analyzed the results, and concluded that to understand employee satisfaction (or dissatisfaction), he had to divide work factors into two categories:

Two-Factor Theory and the Workplace

We’ll ask the same question about Herzberg’s model as we did about Maslow’s: What does it mean for managers? Suppose you’re a senior manager in an accounting firm, where you supervise a team of accountants, each of whom has been with the firm for five years. How would you use Herzberg’s model to motivate the employees who report to you? Let’s start with hygiene factors. Are salaries reasonable? What about working conditions? Does each accountant have his or her own workspace, or are they crammed into tiny workrooms? Are they being properly supervised or are they left on their own to sink or swim? If hygiene factors like these don’t meet employees’ expectations, they may be dissatisfied with their jobs.

Fixing problems related to hygiene factors may alleviate job dissatisfaction, but it won’t necessarily improve anyone’s job satisfaction. To increase satisfaction (and motivate someone to perform better), you must address motivation factors. Is the work itself challenging and stimulating? Do employees receive recognition for jobs well done? Will the work that an accountant has been assigned help him or her to advance in the firm? According to Herzberg, motivation requires a twofold approach: eliminating “dissatisfiers” and enhancing satisfiers.

If you were a manager, wouldn’t you like to know how your employees decide whether to work hard or goof off? Wouldn’t it be nice to know whether a planned rewards program will have the desired effect—namely, motivating them to perform better in their jobs? These are the issues considered by psychologist Victor Vroom in his expectancy theory, which proposes that employees will work hard to earn rewards that they value and that they consider “attainable”.

As you can see from the figure below, Vroom argues that an employee will be motivated to exert a high level of effort to obtain a reward under three conditions – the employee:

Expectancy Theory and the Workplace

To apply expectancy theory to a real-world situation, let’s analyze an automobile-insurance company with one hundred agents who work from a call centre. Assume that the firm pays a base salary of $2,000 a month, plus a $200 commission on each policy sold above ten policies a month. In terms of expectancy theory, under what conditions would an agent be motivated to sell more than ten policies a month?

Now let’s alter the scenario slightly. Say that the company raises prices, thus making it harder to sell the policies. How will agents’ motivation be affected? According to expectancy theory, motivation will suffer. Why? Because agents may be less confident that their efforts will lead to satisfactory performance. What if the company introduces a policy whereby agents get bonuses only if buyers don’t cancel policies within ninety days? Now agents may be less confident that they’ll get bonuses even if they do sell more than ten policies. Motivation will decrease because the link between performance and reward has been weakened. Finally, what will happen if bonuses are cut from $200 to $25? Obviously, the reward would be of less value to agents, and, again, motivation will suffer. The message of expectancy theory, then, is fairly clear: managers should offer rewards that employees value, set performance levels that they can reach, and ensure a strong link between performance and reward.

What if you spent thirty hours working on a class report, did everything you were supposed to do, and handed in an excellent assignment (in your opinion). Your roommate, on the other hand, spent about five hours and put everything together at the last minute. You know, moreover, that he ignored half the requirements and never even ran his assignment through a spell-checker. A week later, your teacher returns the reports. You get a C and your roommate gets a B+. In all likelihood, you’ll feel that you’ve been treated unfairly relative to your roommate.

Your reaction makes sense according to the equity theory of motivation, which focuses on our perceptions of how fairly we’re treated relative to others. Applied to the work environment, this theory proposes that employees analyze their contributions or job inputs (hours worked, education, experience, work performance) and their rewards or job outcomes (salary, bonus, promotion, recognition). Then they create a contributions/rewards ratio and compare it to those of other people. The basis of comparison can be any one of the following:

What will an employee do if he or she perceives an inequity? The individual might try to bring the ratio into balance, either by decreasing inputs (working fewer hours, not taking on additional tasks) or by increasing outputs (asking for a raise). If this strategy fails, an employee might complain to a supervisor, transfer to another job, leave the organization, or rationalize the situation (e.g., deciding that the situation isn’t so bad after all). Equity theory advises managers to focus on treating workers fairly, especially in determining compensation, which is, naturally, a common basis of comparison.

Fundamentals of Business: Canadian Edition by Pamplin College of Business and Virgina Tech Libraries is licensed under a Creative Commons Attribution-NonCommercial-ShareAlike 4.0 International License, except where otherwise noted.