Skip to content
Unless otherwise noted, the majority of the content within this chapter has been retrieved from Cultures and Organizations Software of The Mind: Intercultural Cooperation and Its Importance for Survival by Geert Hofstede, Gert Jan Hofstede, and Michael Minkov[1].

After completing this chapter, you will be able to:

Professor Geert Hofstede created a framework in the 1980s for understanding cultural differences. He studied different cultures and determined that cultures differ according to how much importance they place on a particular value. He then created six “dimensions” or “value continuums.” By studying a culture, you can determine where it “sits” on each of the six continuums and then compare it to where another culture “sits” on the same continuum.  It is important to understand that each dimension is a spectrum, and a culture falls somewhere between the two extreme ends of that spectrum; there are no 100% absolutes. When you evaluate a culture based on one of the dimensions, you can picture the culture’s “score” as being a point along a line, but it is critical to to not ascribe a value judgement to a culture’s “score”. A higher or lower “score” on any dimension is not “good” or “bad”. The scores simply show how much importance a culture places on a particular value. In other words, the polar opposite ends of the value continuums simply indicate different values NOT different levels of ethics or morality and no score is better or worse than another.

Evaluating where a culture sits on the spectrum of each of these dimensions can assist you in determining if the culture is a predominantly high-context or low-context culture. Always remember that a discussion of culture is necessarily a discussion of generalizations (sometimes called “prototypes” or “cultural patterns”) and so the “score” of a particular culture is not necessarily representative of the values of every member of that community.

“National Culture cannot be changed, but you should understand and respect it.”

An attitude of independence and freedom from control characterizes individualism. Members of low-context cultures, particularly North Americans, tend to value individualism. They believe that initiative and self-assertion result in personal achievement. They believe in individual action and personal responsibility, and they desire a large degree of freedom in their personal lives. Members of high-context cultures are more collectivist. They emphasize membership in organizations, groups, and teams; they encourage acceptance of group values, duties, and decisions. They typically resist independence because it fosters competition and confrontation instead of consensus.

Members of many low-context cultures value independence and freedom from control.

Many cultures, of course, are quite complex and cannot be characterized as totally individualistic or group oriented. For example, Canadians of European descent are generally quite individualistic, while those with Asian backgrounds may be closer to the group-centred dimension[4].

The following tables illustrate some differences between collectivist and individualist cultures:

This fascinating TEDTalk[5] discusses in more detail how a culture’s position on the individualistic/collectivist dimension can affect communication, especially in terms of humour and insults:

People in some cultures place less emphasis on tradition, ceremony, and social rules than do members of other cultures. North Americans, for example, dress casually and are soon on a first-name basis with others. Their lack of formality is often characterized by directness. In business dealings North Americans come to the point immediately; indirectness, they feel, wastes time, a valuable commodity in North American culture.

Tradition, ceremony, and social rules are more important in some cultures than in others.

This informality and directness may be confusing abroad. In Japan, for example, signing documents and exchanging business cards are important rituals. In Europe first names are never used without invitation. In Arab, South American, and Asian cultures, a feeling of friendship and kinship must be established before business can be transacted.

In Western cultures people are more relaxed about social status and the appearance of power[6]. Deference is not generally paid to individuals merely because of their wealth, position, seniority, or age. In many Asian cultures, however, these characteristics are important and must be respected.

The following table illustrates how small versus large power distance manifests itself in the workplace:

In long-term time orientation cultures, time may be perceived as an unlimited and never-ending resource to be enjoyed.

The following table illustrates the differences in short-term and long-term time orientation:

Below, the Hofstede Insights group define the dimensions of high and low uncertainty avoidance, masculinity and femininity, and indulgence and restraint, a dimension that was only recently added to the five originally defined by Hofstede.

The uncertainty avoidance dimension expresses the degree to which the members of a society feel uncomfortable with uncertainty and ambiguity. The fundamental issue here is how a society deals with the fact that the future can never be known: should we try to control the future or just let it happen?

The following tables illustrate how this dimension manifests itself in certain contexts:

The masculinity side of this dimension represents a preference in society for achievement, heroism, assertiveness, and material rewards for success. Society at large is more competitive.

Femininity stands for a preference for cooperation, modesty, caring for the weak and quality of life. Society at large is more consensus-oriented.

Note: The masculinity and femininity dimension is not referring to gender roles or degrees of sexism.

In the business context, masculinity versus femininity is sometimes also related to as “tough versus tender” cultures. The following table illustrates how this dimension manifests itself in the workplace:

Restraint stands for a society that suppresses gratification of needs and regulates it by means of strict social norms.

Indulgent societies are more tolerant of members who wish to seek individual happiness and personal satisfaction.

The following tables illustrate the differences in indulgent versus restrained cultures: 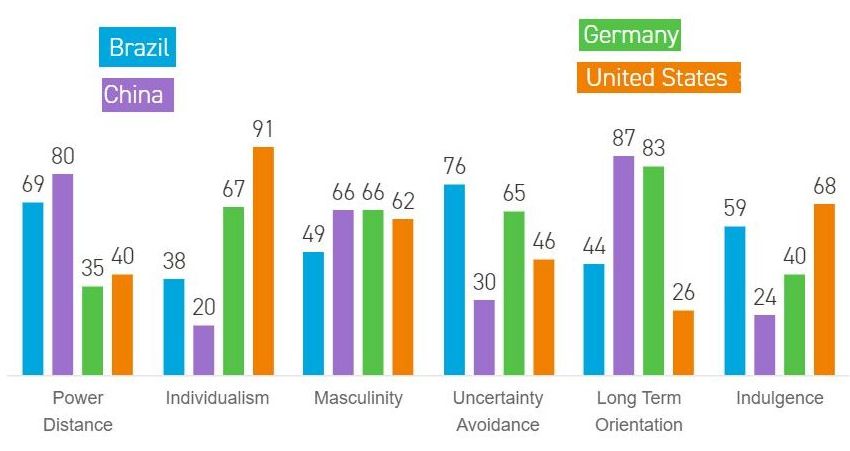 Check your Understanding of Hofstede’s Dimensions of Culture

Intercultural Business Communication by Confederation College is licensed under a Creative Commons Attribution-NonCommercial-ShareAlike 4.0 International License, except where otherwise noted.